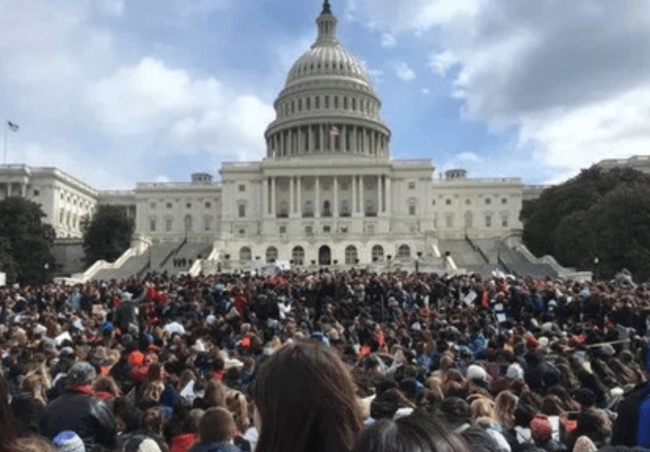 Since the recent March for Our Lives event in Washington D.C., where more than 800,000 marchers and student activists urged real solutions to the gun violence epidemic in this country, I have been awed by the impact young leaders are having on critical discussions around public policy in the United States. It’s an important political moment, where young activists are lending their insight and voices to everything from immigration rights to education.

Here are just some of the ways young activists are working to change and impact policies, and what this movement means for race equity in education.

The U.S. tradition of students leading the way: Dreaming and building a new society

Like the Civil Rights movement, anti-war movement, and other major transformative movements, this movement is also led by young, vibrant student activists pushing us to ask critical questions and shake up the current establishment. Students impacted by a violent mass shooting at Marjory Stoneman Douglas High School in Parkland, Florida, on February 14th are bringing together young and old, diverse communities, and a wide variety of other stakeholders to address gun violence in this country, using a major, public campaign tagged with #NeverAgain on social media and by executing a major national march in Washington D.C.

Like students before them, and including recent examples of The Dreamers, Standing Rock activists, and Black Lives Matters young activists, U.S. student activists have always advanced our society further into an exploration of more just policies and a more inclusive future, utilizing a unique and fresh tactics than those of us who are currently working our way through status quo systems and archaic institutions.  Quite frankly – who else can dream up a new society than those most impacted by critical social issues and those at the start of their lives who have the urgency and the energy to build that new society into reality?

The Dreamers, undocumented immigrant youth, have done this as they shaped DACA conversations with the Obama administration in 2012 and as they shape state policies related to higher education access in various communities. Black Lives Matters young activists have asked critical questions about policy accountability after unjust killings of Black men and women in various communities nationwide. At Standing Rock, American Indian students, women,  and families stood up for American Indian tribal rights and environmental justice.

It is by no surprise that the Dreamers, Black Lives Matters activists and American Indian activists also continue to fight for better schools in their communities, to end the school to prison pipeline, and other important issues related to education equity and U.S. public schools. Students have led the way – and shape better social justice outcomes for us all.

The March for Our Lives event exemplified something critical in the gun violence reform movement: just how important centering young people of color is to this public policy issue and to the struggle for education equity and racial justice. The march and movement organizers could have just showcased the impact of gun violence on the young, white teenagers from Parkland, Florida – but instead they filled the program with young men and women of color to tell their stories from other communities such as Chicago and Los Angeles.

A great example of this is when Edna Lisbeth Chavez so fiercely urged us to consider: “Why does the Los Angeles Unified School District have it’s own police department, criminalizing Black and Brown children – when we should have a department of restorative justice instead!” See her whole speech here.

A young man from Chicago, D’Angelo McDade, spoke about the harms of gun violence to him personally and in his community. He also referenced how there are many more social disparities that have impacted his community,  bringing attention to racial disparities–“We are also survivors of unjust policies and practices!” See his friend Alex King and his speech here.

Eleven-year old Naomi Wadler of Alexandria, Virginia, spoke of the omission of stories of violence as they relate specifically to African American girls and women. She boldly proclaimed, “I am here to acknowledge and represent the African-American women whose stories don’t make the front page of every national newspaper, whose stories don’t lead on the evening news!”  See Naomi’s powerful speech here.

The March for Our Lives movement lifted up young people of color – and therefore shaped the gun reform policy debate to include those perspectives and experiences in an intentional, intersectional manner.

As we look into the future of social policy debates—from gun reform to ethnic studies to the school to prison pipeline issues—we know we will get a more racially equitable outcome if we listen to our youth.  There is a unique impact, due to histories and origins, that impact immigrant youth, African American youth, Muslim youth, American Indian youth, etc… differently. MnEEP has 5 Big Bold Goals that reflect this intentional listening to youth and communities of color and American Indian youth to shape better education equity in Minnesota.

Reshaping and transforming public education requires understanding the unique relationships these communities have with our education system and removing barriers that exist due to those historic relations.  Most importantly, listening to all of our communities will be essential for strong and racially just schools and communities.

The March for Our Lives movement and other movements give us important examples on how this gets done.

Posted in Our Voices, Race Equity